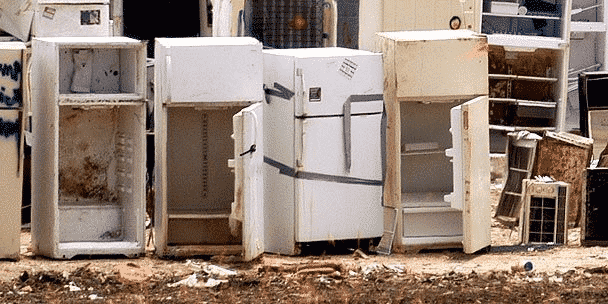 The ever-growing concern of wastes produced by home appliances

Before mankind was doomed to mortality by the Almighty, Earth was defined as the “delicious Paradise” in John Milton’s ‘Paradise Lost’ for whom, this was

Mankind created, and for him this World”.

But now, as we cast a glance at our surroundings, we can’t help but agree with what Milton claimed to be the “womb of Nature, and perhaps her grave”. In ancient times, man still had his messiah in form of Jesus Christ, but in the modern age, the destruction that god’s best creation has caused to himself and the environment around him is beyond repair.

The landfills that were primarily created to bury the man-made waste under the earth, seems to be shrieking with terror as the amount of scrap that is being eventually dumped has surpassed the threshold of these areas. The ground can no more contain the hazardous materials dumped in it giving rise to huge heaps of waste that are being exposed to the open air thus slowing down the rate of decomposition. However, you will be thrilled to know that recent studies have proven that the electronic wastes that include mobile phones, office, and home appliances and gadgets have surpassed the organic and plastic waste. If the statistics are to be believed, e-wastes contributed to more than half of the total wastes dumped and weighed around 44.7 million metrics tones in 2016; but there is no stopping at that, if the rate at which people are continuing to dump the wastes remain steady, within 3 years, this number will grow by 17%. If this fact doesn’t horrify and alarm readers, we are unsure about what will.

A developed nation and stalwart in the world of electronics, Canada, along with other influential countries like China, India, and Africa are being held responsible as the top contributors to the waste dumped through home appliances. Apart from the peril that these wastes are introducing the environment to, the toxic elements that are being released by these wastes when comes in contact with the open air that includes water and dust particles, catalyze the process of release and when reaches the system of man and other animals, can bear symptoms of respiratory disorders, skin allergies, and even cancer. Nonetheless, Canada’s Waste Reduction and Management Division has signed the 1992 Basel Convention that strives at controlling and decreasing the dumping of e-waste and consequently reducing the risks to the environment and man.

The production of scrap in such bulk shouldn’t come as a surprise considering the advancements made in science and technology with each passing minute. The swift development is pooling in new methods to operate these machines efficiently thus reducing their prices by a huge margin. Such lessening of retail is tempting the homemakers to purchase one appliance for each purpose to ensure enhanced convenience. With each appliance installation, the previous one is being merely discarded in the dump-yard without any proper thoughts or recycling it. Moreover, there are a lot of houses that prefer home appliance installation all by themselves without hiring a professional appliance technician that leads to increased waste disposal due to the proper lack of knowledge and ways of the fitting. Additionally, because the prices of these appliances are plunging, people are choosing to simply buy something new and more attractive for their homes rather than spending on appliance repair.

The e-wastes are not restricting their pollution only to the land; they are imposing higher risks by flowing into the water bodies making them dirty and unhealthy. The speed at which the snow caps of our earth are melting and the abnormal alteration of the seasonal cycles are proof enough that we are not far from witnessing the final destruction. It has been seen that only 20% of the total e-waste that includes a generous amount of home appliances were sent for recycling or reuse; the rest of it has been left to the earth to decompose itself. The gnawing risks created by this scrap are not only for Canada to ponder upon; it quite meticulously qualifies for global concern. Most of the developing countries are taking a step back from controlling these wastes due to the lack of enough resources and principal and further, by overcoming the restrictions posed by the International Environmental Laws, the black marketers are gaining an upper hand in this business by gathering parts from the home appliances that are discarded, and then polishing and trading them as new at much higher prices. Even if one particular land is cleaned, the effects curated from the surrounding areas will be either borne by air or water that contributes to intensifying the Greenhouse Effect and accelerated Global Warming.

Your role in controlling the wastes

The damage that we have already caused to Mother Earth stands at a point from where its original state cannot be retrieved; however, there are ways, taking recourse to which will help you do your bit.

Appliance Technician Ltd. Appliance repair in Ottawa
4.9
Based on 189 reviews
See all reviewsWrite a review

M M
14:34 28 Dec 22
An excellent experience from start to finish. After a power outage, our clothes washing machine was... not working (control panel was not functional and water was not draining). Appliance Technician Ltd. answered my call quickly, and we set up an appointment for the following day. Machine was fixed quickly, and I received excellent advice about how to prevent the problem from happening again and how to best maintain machine.read more

AE
16:22 05 Dec 22
My Bloomberg dryer stopped working - I called multiple appliance repair shops who said they don’t... fix this brand. Appliance Technician was one of the few. I am extremely happy with the quality of service I received from the receptionist who took my call to the actual technician Pavlo who quickly assessed and fixed the issue. He took the time to explain the cause and recommended ways that I could extend the life of my washer and dryer. He even cleaned up all of the dust and dirt that had accumulated behind them!! 10/10 would recommend!read more

Kate Macdonald
21:51 14 Nov 22
Yuri was knowledgeable, efficient, and communicated the problem and how he would repair it with... clarity. I was very impressed and highly recommend this service, and, more specifically, this serviceman.read more

Hai Nguyen
13:28 23 Aug 22
I had an issue with my Blomberg dryer at my rental condo. I called Appliance Technician Ltd and set... an appointment. The technician came on time and knew what the issue was. I had to go online and order the part he needed. Once the part came, he came back to finish the job and now the dryer is working again. This saved me a ton of money and headache. I would recommend using this business.read more

We are ready to serve you